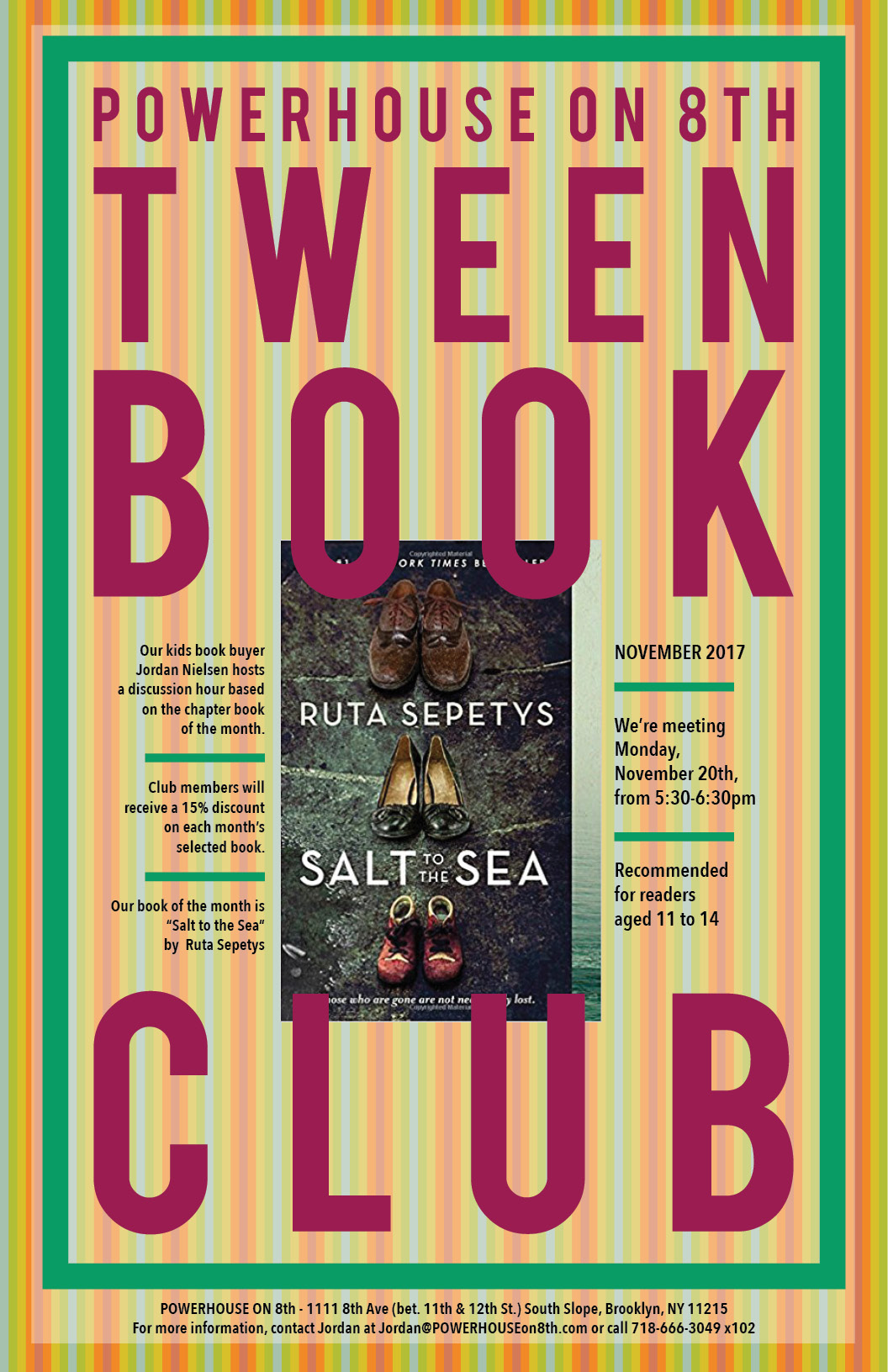 Our kids book buyer Jordan B. Nielsen hosts a discussion hour based on Salt to the Sea by Ruta Sepetys.

Told in alternating points of view, this masterful piece of WWII-era historical fiction is inspired by the real-life tragedy that was the sinking of the”Wilhelm Gustloff”, the greatest maritime disaster in history. A powerful epic that proves humanity and love can prevail, even in the darkest of hours.

Club members will receive a 15% discount on each month’s selected books. For more information, please contact Jordan Nielsen at Jordan@powerhouseon8th.com.

About Salt to the Sea:

For readers of Between Shades of Gray and All the Light We Cannot See, Ruta Sepetys returns to WWII in this epic novel that shines a light on one of the war’s most devastating—yet unknown—tragedies.


World War II is drawing to a close in East Prussia and thousands of refugees are on a desperate trek toward freedom, many with something to hide. Among them are Joana, Emilia, and Florian, whose paths converge en route to the ship that promises salvation, the Wilhelm Gustloff. Forced by circumstance to unite, the three find their strength, courage, and trust in each other tested with each step closer to safety.

Just when it seems freedom is within their grasp, tragedy strikes. Not country, nor culture, nor status matter as all ten thousand people—adults and children alike—aboard must fight for the same thing: survival.

Told in alternating points of view and perfect for fans of Anthony Doerr’s Pulitzer Prize-winning All the Light We Cannot See, Erik Larson’s Dead Wake, and Elizabeth Wein’s Printz Honor Book Code Name Verity, this masterful work of historical fiction is inspired by the real-life tragedy that was the sinking of the Wilhelm Gustloff—the greatest maritime disaster in history. As she did in Between Shades of Gray, Ruta Sepetys unearths a shockingly little-known casualty of a gruesome war, and proves that humanity and love can prevail, even in the darkest of hours.

Ruta Sepetys was born and raised in Michigan in a family of artists, readers, and music lovers. The daughter of a refugee, Ruta is drawn to stories of strength through struggle. Her award-winning historical novels are published in over fifty countries. “Between Shades of Gray” was inspired by her family’s history in Lithuania. Her second novel, “Out of the Easy” is set in the French Quarter of New Orleans in 1950, and her third novel, “Salt to the Sea, exposes one of the greatest hidden disasters of World War II. Ruta lives with her family in Tennessee.