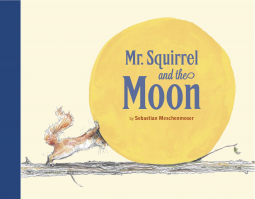 Winter 2015 Top Ten IndieNext Pick Mr. Squirrel and the Moon is a charming and absurdist tale of a troop of forest creatures that are confronted with one big, out of this world problem.

About Mr. Squirrel and the Moon:

When Mr. Squirrel awakens to find that the moon has landed on his tree, he frantically tries to get rid of it before someone suspects him of stealing it and puts him in jail. But when he rolls the moon off of his tree, it gets stuck on Mrs. Hedgehog’s bristles. Then a billy-goat arrives and butts it with his horns . . . Will the moon ever be the same again? Sebastian Meschenmoser’s hilarious illustrations and rollicking tale will be a bedtime favorite. Sebastian Meschemoser is one of Germanys’ most successful and admired young illustrators for children. He has been nominated for the Deutscher Jugendliteraturpreis (Germany’s Children’s Book of the Year Award) and a coveted Lesepter Award. In 2008, he won the Dutch Silver Pencil (Zilveren Penseel) Award for the best foreign book illustrator of the year-an award previously won by the UK’s Tony Ross, America’s David MacCauley and his fellow German, Wolfgang Erlbruch.