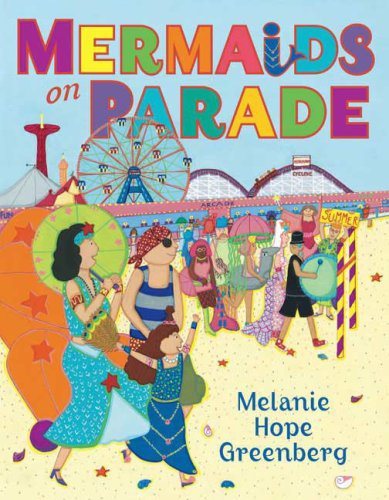 From award-winning creator of sixteen books for children comes a celebration that brings sea creatures to land, and one little mermaid out of her shell.

About Mermaids on Parade:

Once a year, mermaids, Neptunes and legendary sea creatures come to life – leaving their oceans to parade on the land. They sparkle and glitter and make the streets of Coney Island electric with excitement. In the middle of it all, a shy little mermaid comes out of her shell to march with all the others. Young and old alike can enjoy the saltwater taffy-hued costumed entrants who come to honor the ocean and march in the nation’s largest art parade that weaves it’s way through a world famous amusement park. Kirkus Reviews says, “A good time is plainly had by all”. Publisher’s Weekly says, “jumps to life”…”celebratory scenes packed with myriad geometric motifs succeed in capturing the festival spirit”.

She is the illustrator of A City Is by Brooklyn’s first poet laureate, Norman Rosten. Her book, Down in the Subway, by Miriam Cohen, became a New York Times Great Children’s Read. Many of her books depict urban community life. She drew on her own experiences of marching as a mermaid with the Superfine Dinettes, a performance art troupe in Dumbo, Brooklyn to write this story. Melanie Hope Greenberg has illustrated 16 trade published children’s picture books; six of them she wrote. Recently an artist in residence for the Eric Carle Museum of Picture Book Art’s National Endowment for the Arts grant titled “Picture This! Bridging Arts and Literacy”. Her original picture book illustrations were part of the “Drawn in Brooklyn” group exhibition at Brooklyn Central Library-Grand Army Plaza. http://www.melaniehopegreenberg.com/