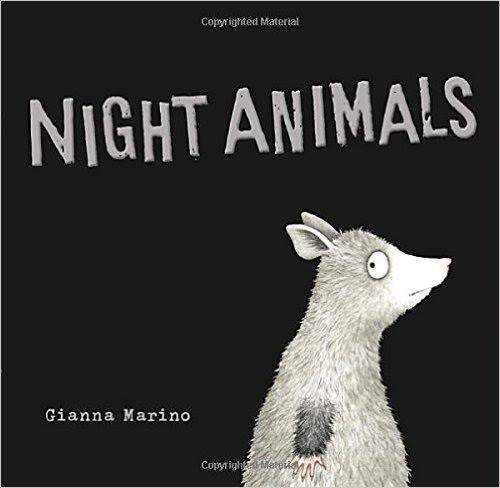 Night Animals is a charming tale about how a crew of critters conquers their fear of the dark.

Superbly talented author/illustrator Gianna Marino has had five books published to high critical acclaim. Marino’s career will reach the next level when Night Animals, her most clever and universally relatable story to date, is published. This shrewd bedtime book will help calm young readers’ fears by getting them to laugh away their nerves, and was chosen as a Summer 2015 Kids’ Indie Next List pick!

Night Animals begins when Skunk asks Possum why he’s hiding, setting off a chain reaction of animals scared of sounds in the night. Even Wolf and Bear are sure something’s out there. “What is that something?” asks Bat. “Night Animals!” reply the animals. “But you ARE night animals,” states Bat. When the group of nervous nocturnal animals sheepishly realizes they’ve been running away from each other, giggles ensue!

Marino deftly uses an all-black background for these worried animals’ wanderings, visually preparing kids for the dark of bedtime. Caretakers will love this tool for transitioning children from day to night.  Night Animals gently teaches that there is no reason to fear the natural noises of nighttime. With two starred reviews from Kirkus Reviews and Booklist, Night Animals is poised to become a modern classic.

About the Author and Illustrator:

Gianna Marino has had several jobs at once: apprenticing a muralist, a jewelry designer, a product designer and driving horse carriages through the park. Between projects and then college, Gianna visited West, East and North Africa, India, Nepal, Burma, Thailand, Vietnam, Laos, Bhutan, China, Indonesia, Australia, New Zealand, Tahiti, Noumea, crewed on sailboats in Mexico and the Caribbean and lived in Europe for a time. She now lives and works in the Napa Valley. Learn more at giannamarino.com.