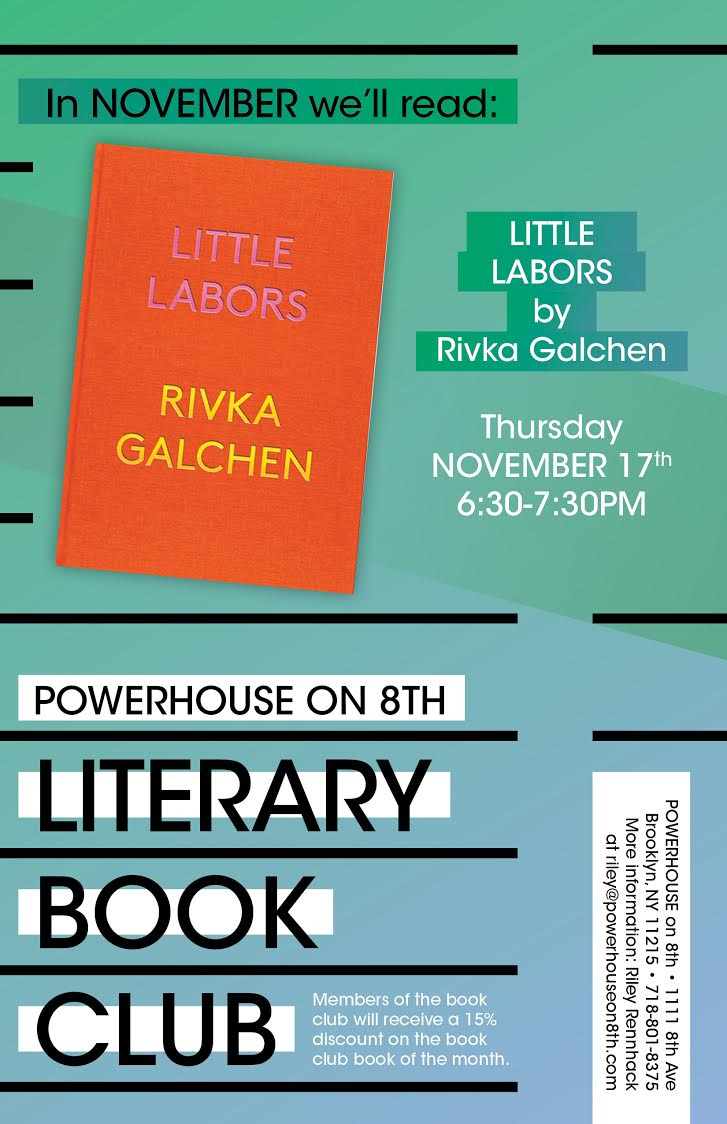 
Join us for the first meeting of our Literary Book Club, where we’ll be reading Rivka Galchen’s LITTLE LABORS, a dizzyingly brilliant collection of wry, intimate observations, stories, and essays questioning where children fit in art and in literature.
About Little Labors:

Rivka Galchen’s Little Labors is a droll and dazzling compendium of observations, stories, lists, and brief essays about babies and literature

Little Labors is a slanted, enchanted literary miscellany. Varying in length from just a sentence or paragraph to a several-page story or essay, Galchen’s puzzle pieces assemble into a shining, unpredictable, mordant picture of the ordinary-extraordinary nature of babies and literature. Anecdotal or analytic, each part opens up an odd and tender world of wonder. The 47 Ronin; the black magic of maternal love; babies morphing from pumas to chickens; the quasi-repellent concept of “women writers”; origami-ophilia in Oklahoma as a gateway drug to a lifelong obsession with Japan; discussions of favorite passages from the Heian masterpieces Genji and The Pillow Book; the frightening prevalence of orange as today’s new chic color for baby gifts; Frankenstein as a sort of baby; babies gold mines; babies as tiny Godzillas …

About the author:
Rivka Galchen (born April 19, 1976) is a Canadian-American writer. Her first novel, Atmospheric Disturbances, was published in 2008 and was awarded the William Saroyan International Prize for Writing. Galchen teaches writing at Columbia University and is a contributing editor at Harper’s Magazine.

Galchen’s short-story collection, American Innovations, was published in 2014. The collection was long listed for the 2014 Scotiabank Giller Prize and awarded the Danuta Gleed Literary Award.