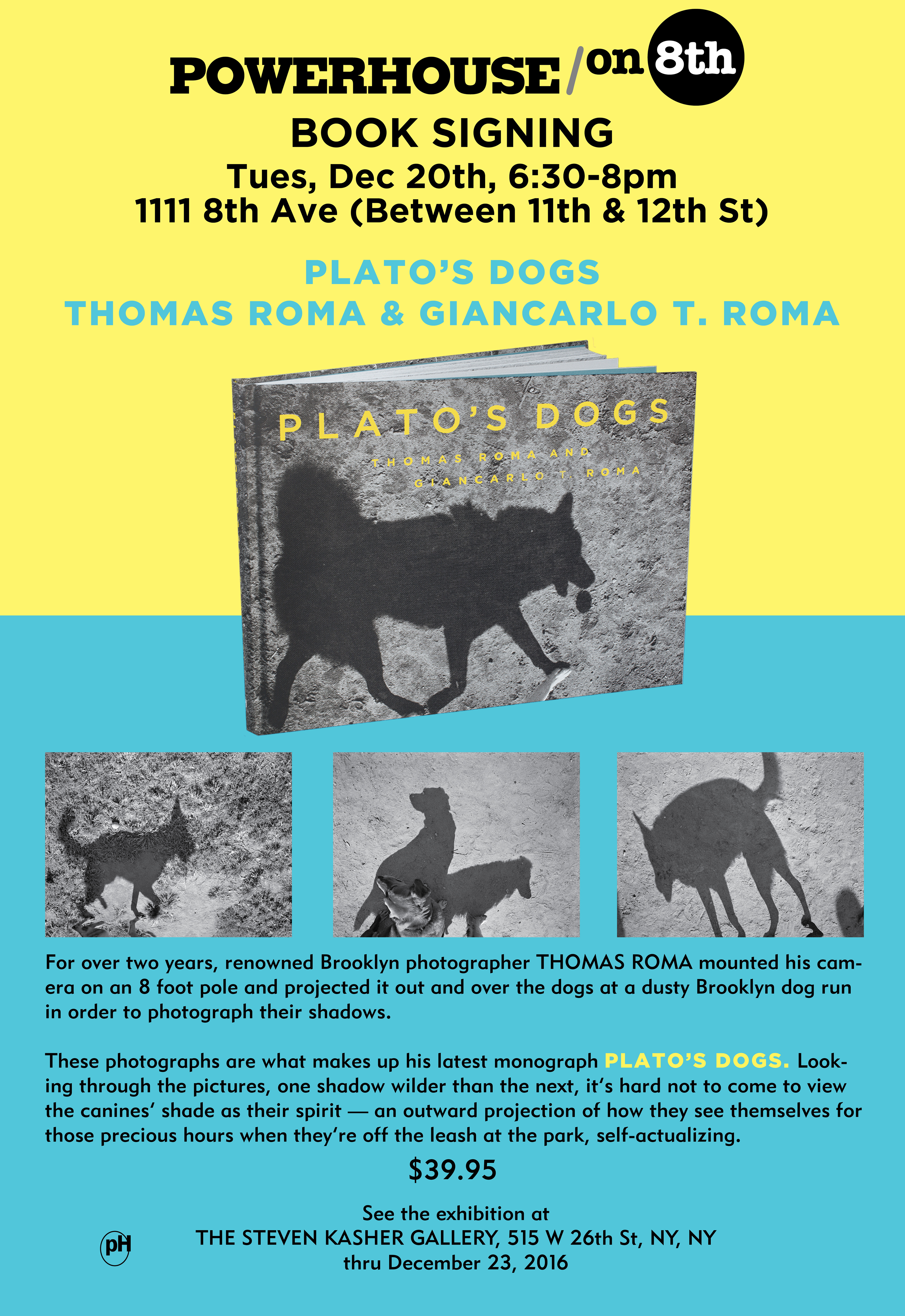 Join us for a book signing of PLATO’S DOGS, just in time for the holidays!

For over two years, photographer Thomas Roma mounted his camera on an 8 foot pole and projected it out and over the dogs at a dusty Brooklyn dog run in order to photograph their shadows. Plato’s Dogs is simultaneously foreign and familiar in its depiction of its subjects. On one hand, the dogs look little like themselves in the pictures, distorted and featureless in their silhouettes. But on the other, they appear truer to their essential self, their primitive substance and oddly—given the misleading nature of the shadow in Plato’s cave allegory—closer to their Platonic form. Looking through the pictures, one shadow wilder than the next, it’s hard not to come to view the canines’ shade as their spirit—an outward projection of how they see themselves for those precious hours when they’re off the leash at the park, self-actualizing. (Notably, in their obscured rendering, their collars disappear.) Some resemble fearsome wolves, some stoic water buffalo, and some a new breed of creature altogether, but never a pet, never the animal that will later sleep at the foot of your bed.

Thomas Roma: Twice the recipient of Guggenheim Fellowships and a New York State Council for the Arts Fellowship, Mr. Roma’s work has appeared in one-person and group exhibitions internationally, including one-person shows with accompanying books at the Museum of Modern Art NY and the International Center of Photography. He has published 14 monographs to date and has taught photography since 1983, becoming the Director of Photography at Columbia University School of the Arts in 1996 where he is a Professor of Art. His work is in numerous collections, including The Museum of Modern Art, New York; The San Francisco Museum of Modern Art; The Art Institute of Chicago; The Los Angeles County Museum of Art; and The Canadian Center for Architecture, Montreal.

Giancarlo T. Roma: Giancarlo Roma is a 2013 graduate of Columbia University with a degree in English and African American Studies. He is the co-author of two books, Show & Tell (2002) and The Waters of Our Time (2014), a contributing writer for Vice, and was published in the Sunday New York Times in 2015. A former stockbroker, he is the co-founder of the apps Clustr and Postcard, as well as an avid chess and guitar player.