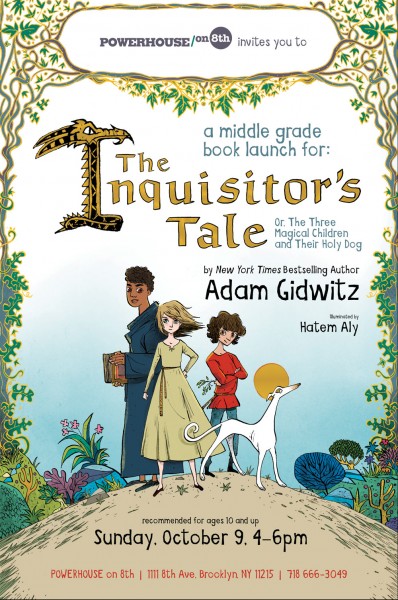 The bestselling author of A Tale Dark and Grimm takes on medieval times in an exciting and hilarious new adventure about history, religion…and farting dragons. Meet the author at this special book event!

About The Inquisitor’s Tale:

1242. On a dark night, travelers from across France cross paths at an inn and begin to tell stories of three children: William, an oblate on a mission from his monastery; Jacob, a Jewish boy who has fled his burning village; and Jeanne, a peasant girl who hides her prophetic visions. They are accompanied by Jeanne’s loyal greyhound, Gwenforte…recently brought back from the dead.
As the narrator collects their tales, the story of these three unlikely allies begins to come together.

Their adventures take them on a chase through France to escape prejudice and persecution and save precious and holy texts from being burned. They’re taken captive by knights, sit alongside a king, and save the land from a farting dragon. And as their quest drives them forward to a final showdown at Mont Saint-Michel, all will come to question if these children can perform the miracles of saints.

Adam Gidwitz is the author of the critically-acclaimed, New York Times bestselling Grimm trilogy. His debut novel, A Tale Dark & Grimm was an E. B. White Read Aloud Finalist and a selection on the Today Show’s Al’s Book Club for Kids. His books have been on countless state award and “Best of” lists. A former teacher at St. Ann’s in Brooklyn, Adam, who now writes full time, spent a year in France researching An Inquisitor’s Tale. He lives with his family in Brooklyn, NY.