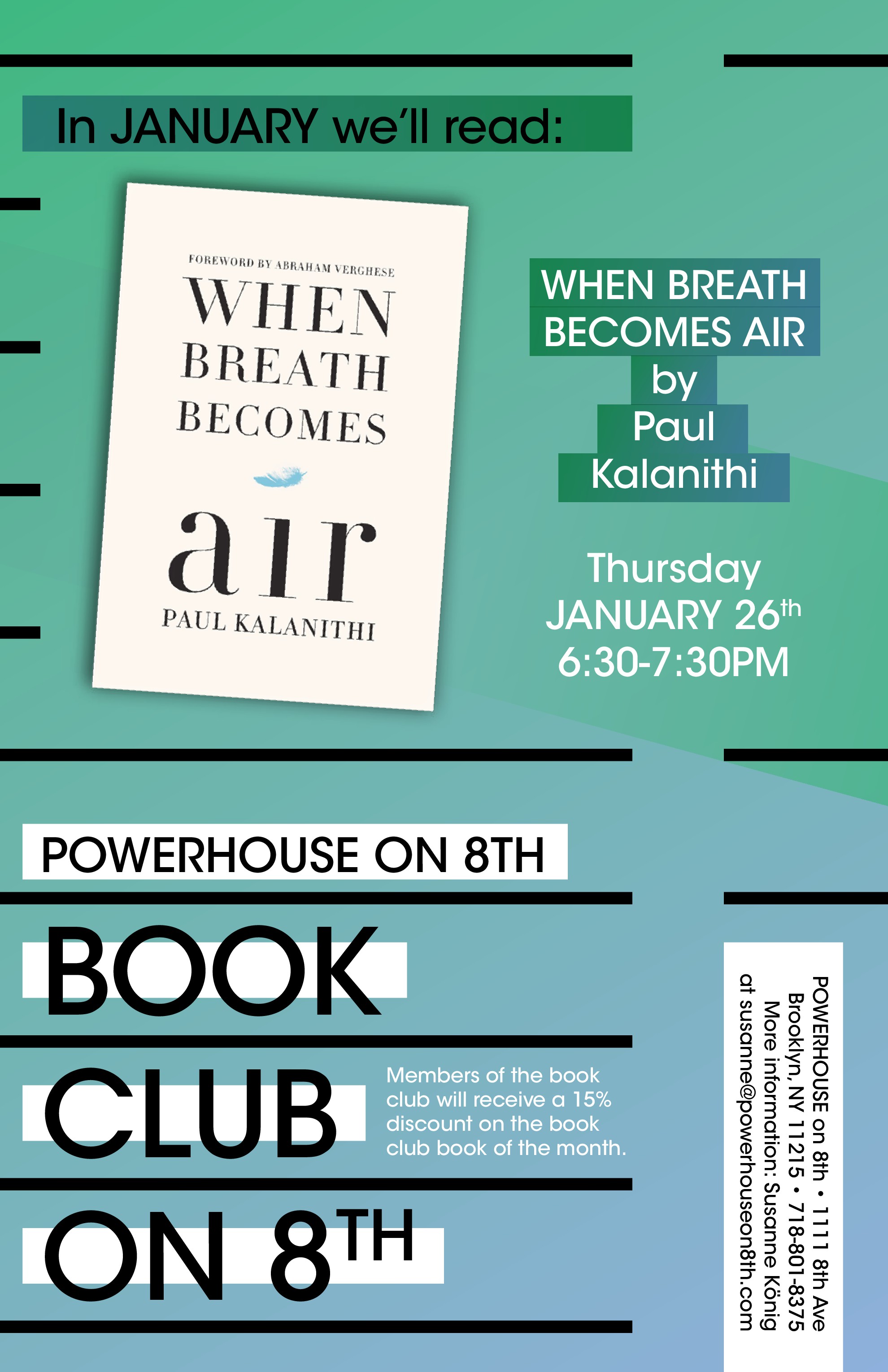 Join us for a discussion on When Breath Becomes Air by Paul Kalanithi. Club members will receive a 15% discount on each month’s selected books. For more information, please contact Susanne König at susanne@powerhousearena.com.

About When Breath Becomes Air:

WHEN BREATH BECOMES AIR is a deeply humane, inspiring memoir by a young neurosurgeon faced with a terminal diagnosis that attempts to answer the questions: given that all organisms die, what makes a meaningful life? And, as a doctor, what does it mean to hold mortal—and moral—responsibility for another person’s identity? For readers of Atul Gawande and Siddhartha Mukherjee.

At the age of 36, on the verge of a completing a decade’s worth of training as a neurosurgeon, Paul Kalanithi’s health began to falter. He started losing weight and was wracked by waves of excruciating back pain. A CT scan confirmed what Paul, deep down, had suspected: he had stage four lung cancer, widely disseminated. One day, he was a doctor making a living treating the dying, and the next, he was a patient struggling to live. Just like that, the future he and his wife had imagined, the culmination of decades of striving, evaporated.

With incredible literary quality, philosophical acuity, and medical authority, he approaches the questions raised by facing mortality from the dual perspective of the neurosurgeon who spent a decade meeting patients in the twilight between life and death, and the terminally ill patient who suddenly found himself living in that liminality. What makes life worth living in the face of death? What happens when the future, instead of being a ladder toward the goals of life, flattens out into a perpetual present? When faced with a terminal diagnosis, what does it mean to have a child, to nuture a new life as another one fades away? As Paul wrote, “Before my cancer was diagnosed, I knew that someday I would die, but I didn’t know when. After the diagnosis, I knew that someday I would die, but I didn’t know when. But now I knew it acutely. The problem wasn’t really a scientific one. The fact of death is unsettling. Yet there is no other way to live.”

Paul Kalanithi was a neurosurgeon and writer. He graduated from Stanford with a B.A. and M.A. in English literature and a B.A. in human biology. He earned an M.Phil in the history and philosophy of science and medicine from Cambridge and graduated cum laude from the Yale School of Medicine, where he was inducted into the Alpha Omega Alpha national medical honor society. He returned to Stanford to complete his residency training in neurological surgery and a postdoctoral fellowship in neuroscience, and received the American Academy of Neurological Surgery’s highest award for resident research. He died in March 2015. He is survived by his family, including his wife Lucy, and their daughter Elizabeth Acadia.